My book, Searching for the Lost Tombs of Egypt came out in paperback yesterday, and I’m just beginning to think about going back to Egypt looking for ‘missing tombs’ with a fourth group this October. One of the individuals I talk about in Chapter 3 is a little-known pharaoh called Smenkhkare. He (or perhaps she…?) was a pharaoh of the Amarna Period and probably ruled either towards the end of Akhenaten’s reign as a co-regent, or after Akhenaten’s death as his successor (whether immediate or not).

Looking out across the desert plain where once Akhenaten’s capital city stood, taken from the area of the North Tombs

This pharaoh’s name is absent from all the kinglists however, and only came to light for the first time in the early nineteenth century in tomb no. 2 at Amarna, which belonged to a high official, Meryre (ii), the ‘Overseer of the Royal Harem of the Great Royal Wife, Nefertiti’.

Egyptologists today still rely on the six volume series The Rock Tombs of El-Amarna by Norman de Garis Davies, the definitive publication of the decoration in the tombs. By the time de Garis Davies visited tomb no. 2 in the early twentieth century the scene had been badly damaged by robbers and the cartouches identifying the royal figures in the scene in question had been lost.

de Garis Davies’ image the scene of Meryre being rewarded by Smenkhkare and Meritaten. The cartouches (oval shapes enclosing royal names) of the king were originally present at the top right of the scene where de Garis Davies shows a large damaged area. Davies, N de Garis, The Rock Tombs of El-Amarna Part II. The Tombs of Panehesy and Meryra ii (Archaeological Survey of Egypt 14; London, The Egypt Exploration Fund, 1905)

Fortunately, however, the great expedition of Karl Richard Lepsius had visited the tomb in the summer of 1845 and copied the decoration before this vandalism had occurred. 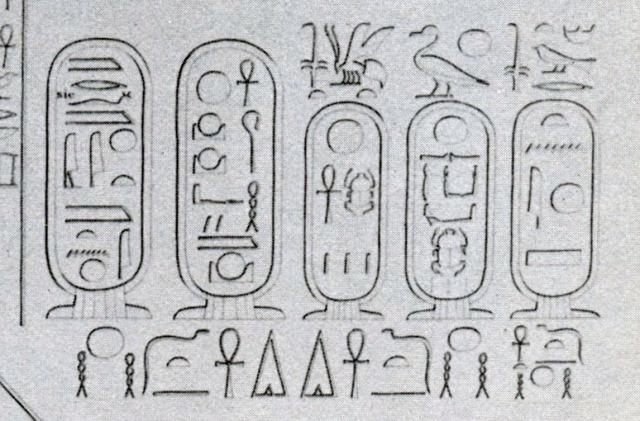 The two largest cartouches, at the left hand end, are those of Akhenaten’s god, the Aten. They are read from top to bottom, right to left as follows: ‘Re, ruler of the two horizons, who rejoices in the Horizon, in his name of light, which is the Aten’ which is the later of two versions of the Aten’s full name. Of the other three smaller cartouches, that at the left, and the one in the centre are the names of Smenkhkare, the larger of the two figures in the centre of the scene. They are read from top to bottom, left to right: ‘The King of Upper and Lower Egypt, Ankhkheperure, the son of Re, Smenkhkare Djeserkheperu’. The cartouche at the far right relates to the smaller of the two figures and reads ‘the Great Royal Wife, Meritaten.’

Although it’s possible that the figures had originally been carved as representations of Akhenaten and Nefertiti the cartouches make it clear that they were eventually intended to represent two different individuals.

Since the tomb was recorded a number of further inscriptions with Smenkhkare’s name have come to light but it all amounts to relatively little, which seems strange given the Meryra scene makes it clear that this individual was Pharaoh of Egypt. We don’t know whether he reigned alongside or after Akhenaten, and the picture has been confused by the presence of the throne-name ‘Ankhkheperure’ in a number of inscriptions but as part of a longer, different royal name from that in the tomb of Meryra, which seems to have belonged to a female pharaoh. This other name included the element ‘Neferneferuaten’ which is known to have been a name held by Akhenaten’s famous queen, Nefertiti. For many, this makes for a straightforward conclusion: Smenkhkare was simply another name used by Ankhkheperure Neferneferuaten/Nefertiti, and Smenkhkare was therefore a woman.

More recently however, as the evidence has been further scrutinised, many have come to conclude that there were in fact two individuals who both used the throne name ‘Ankhkheperure’, one called Smenkhkare who was male, and another called Neferneferuaten who was female.

Of course in this case the scene in the tomb of Meryra ii makes much more sense: the image gives no indication that Smenkhkare was not male and the presence of pharaoh’s wife at his side otherwise takes a bit of explaining.

I have been lucky enough to visit the North tombs at Amarna on several occasions in the last few years. The tombs are by no means all open to visitors; no. 2 is not among those that are regularly visited by tourists but on a recent trip I decided I had to do everything possible to see it and with the help of some friends and a very helpful guardian, I did. I thought we’d be able to walk there but that’s not how it’s done. Here’s what happened…

Once I realised what it was going to take to get there I understood why he was initially so reluctant. As you’ll see from the video the tomb lies a short motorbike ride away from the main group of tombs in the north, and at the top of a steep pathway which has been made a little easier in modern times by the installation of some steps, but is still a bit of an effort in the heat. The guardian started coughing at one point as we hiked upwards, getting slower with every step. “Enta kwayis?” (“Are you alright?”) I asked him. “Tammam” (“OK”) he said, and then “Cigaretta” – blaming his cough on the smoking not the climbing – which made me laugh.

I knew the scene had been badly damaged more than a century ago and didn’t expect to see very much but I hoped I might be able to make out the odd trace of what Lepsius, de Garis Davies and others had seen. There is almost nothing however. The rays of the Aten above the two figures were visible (see – if you squint perhaps – below), and perhaps with better lighting and more time it might have been possible to make more out, but in the circumstances it looked to me as though almost everything else had gone. 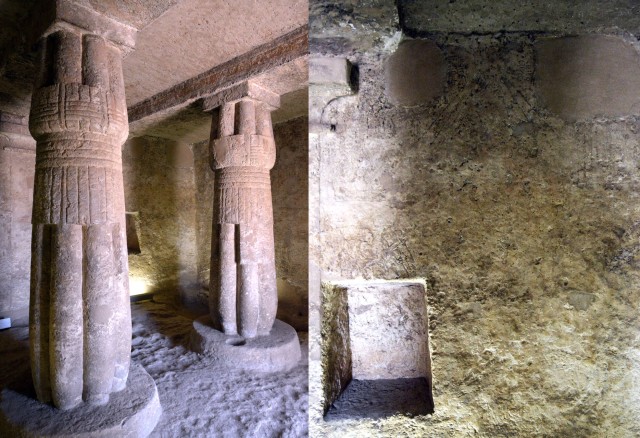 The pillared hall in the tomb of Meryre ii. The wall which once bore images of Smenkhkare and Meritaten lies beyond and inbetween the two pillars in the image on the left; the wall itself is on the right. Can you see the Aten’s rays at the top?

What a shame. Without the scene having been seen and recorded in the mid-1800s our knowledge of Smenkhkare would be so much poorer. And had de Garis Davies been the first to see it, the cartouches having been removed, he would probably have concluded that the figures were those of Akhenaten and Nefertiti, no different from the vast majority of the others at Amarna. It has come to be one of the most iconic scenes for the study of the period, and now it’s gone. A useful reminder perhaps that our knowledge of the ancient past can be transformed by a single piece of evidence. We must be thankful for what we’ve got, but how much more might there once have been?

Another copyist, and a new book…

Incidentally, since I first drafted this piece a few months ago I’ve been working on a new book which tells the story of the history of archaeology and discovery in Egypt through a series of ‘Egyptologists’ Notebooks’. While looking at the glorious, unpublished drawings of the Scottish explorer Robert Hay I decided to see if he had copied the cartouches of Smenkhkare and Meritaten in tomb no. 2 when he visited in 1827, almost two decades before Lepsius. The tombs at Amarna had only recently come to the attention of western explorers in 1824 when they had been ‘discovered’ by the pioneering English Egyptologist John Gardner Wilkinson. In fact Hay, who had arrived in Egypt the same year and was a close friend of Gardner Wilkinson’s, was very annoyed that the existence of the tombs was only revealed to him three years later when their mutual friend, James Burton took him there: “this piece of knowledge has been kept a secret, and has been guarded with as much care as ever miser watched and fondled the largest treasure ever told!” 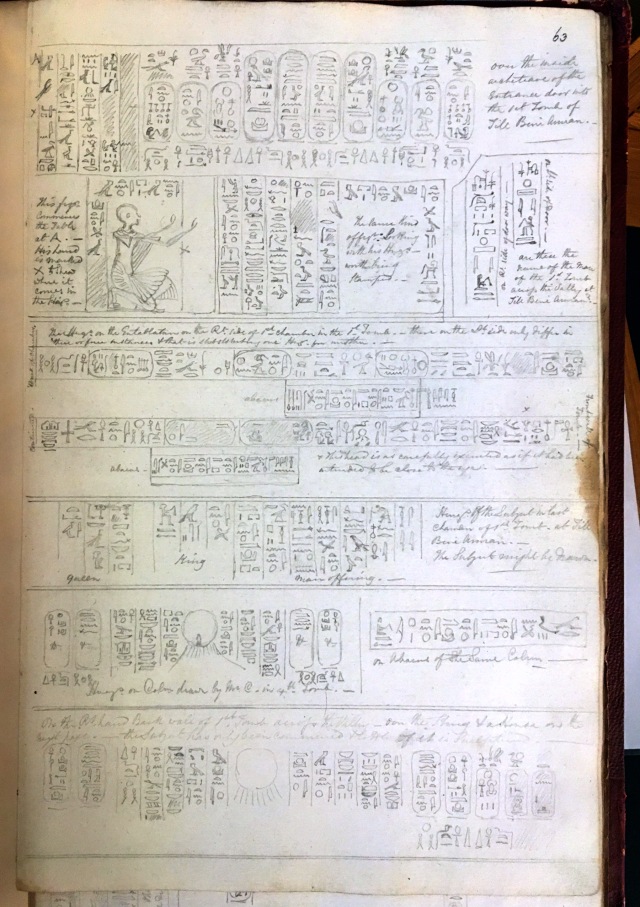 A page of copies and notes made by Robert Hay during his visit to Amarna in 1827 and now in the British Library (Add MS 29847 f63). His copy of the cartouches of Smenkhkare and Meritaten from the tomb of Meryra ii are in the bottom right hand corner (see also below).

Although Hay and the artists he worked with were excellent copyists it seems they couldn’t see the signs as well as Lepsius’ team could – the coronation name Ankhkheperure is clear but the birth name, Smenkhkare and Meritaten’s name are not. Lepsius was one of the great pioneers of the study of the ancient Egyptian language and had the advantage of a much better understanding of Hieroglyphs than Hay could have had at a time when Champollion’s system of decipherment had only just been announced and was still only at a fairly rudimentary stage. 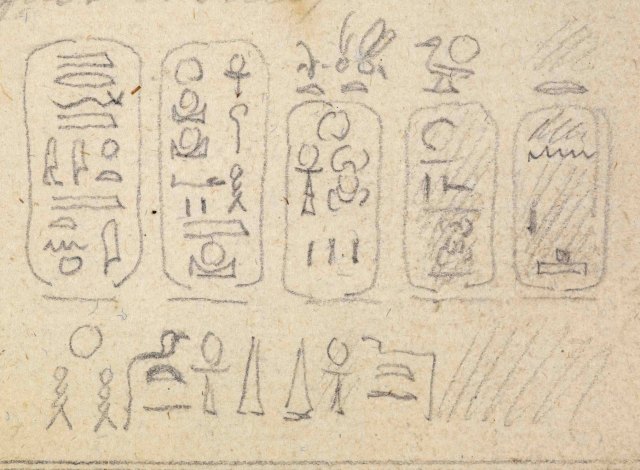 Detail of the cartouches from the Hay manuscript. The cartouches of the Aten, and name Ankhkheperure are clear, but those of Smenkhkare Djeserkheperu and Meritaten were clearly already damaged by this time. There was obviously enough remaining for Lepsius’ team to have read the names in full however. Interestingly, this was one of few pages in the massive Hay archive that had already been photographed digitally when I looked at them in June 2019 so I obviously wasn’t the first to take in interest in Hay’s record of this inscription – no surprises there!

You can be read more about Smenkhkare, Akhenaten, Neferneferuaten and Nefertiti and where they might have been buried in Searching for the Lost Tombs of Egypt – order your copy via Amazon or (in the UK) from your local bookshop via Hive.co.uk. 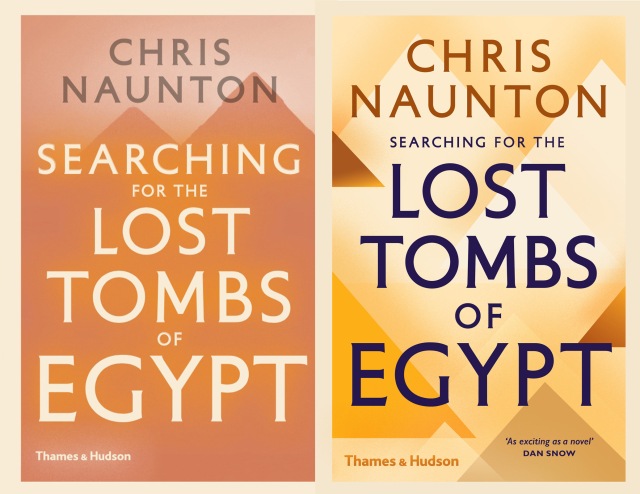